Get fresh music recommendations delivered to your inbox every Friday.
We've updated our Terms of Use. You can review the changes here.

Rip Your Face Off 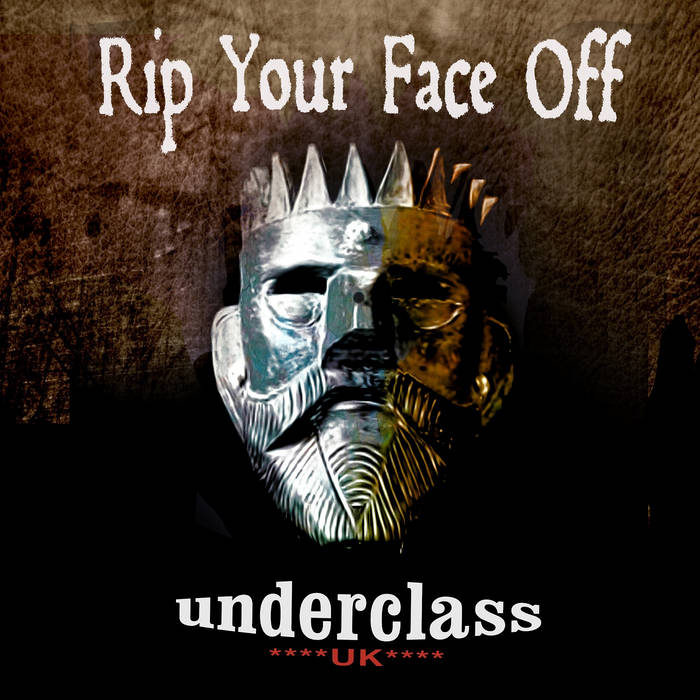 This and other Underclass UK CD's are available from:
www.punklives.co.uk


Always Darkest Before The Dawn
www.youtube.com/watch?v=7f_TRxRHfA0

'The Making of...' A short film.
www.youtube.com/watch?v=doKwjct46hU


Underclass UK was born out of the cultural toilet that was Dagenham in the early eighties. Stuck at the arse-end of the District Line, miles from the city and any decent venue, drowning in its small-town mindset, the only way out for those who didn't fit was drink and drugs, loud music and the last train out of Dagenham East.

Stu and Andy missed the train....

The two inevitably banded together through music, and having grown weary of blasting tunes out from cassette recorders from street corners and being told to fuck off they started making their own racket in true DIY style with guitar and bass as weapons of choice.

Despite the immediate creative sparks, the partnership was snuffed out as outside forces prevailed - Pricey got carted off for a brief stay at her Majesty's pleasure, and Stu went off and got married. And that was that - Andy sold all his guitars and amps to fund nefarious deeds, disappearing into a narcotic wasteland, while Stu struggled on to keep his life on an even keel.

But time passed, the dust settled, and as Stu managed to establish some order in his life, he turned again to the remains of those early sessions. He scrubbed up the survivng songs, wrote a bunch more, and now being well placed to knock them out in respectable form, put out what was to be the first official Underclass UK album - Gratuitous.

And from there it grew.

Then grew again, in the inimitable rollercoaster Underclass UK pattern.

Stu assembled a band of sorts, to play more songs and get it out live. And, in true-punk style, they were all over the place - members came and went, sometimes on the night - and no-one knew what state anyone was going to be in if they did make it to the stage.

Despite this chaos the band put out another studio album, and a live one, when, suddenly, some twenty five years later... Andy reappearred on the scene. Ta dah!

Having found Stu and the band via the internet (invented in the intervening years!) Andy turned up on Stu's doorstep, still guitarless but back from the wasteland and standing up straight, and duly rejoined the band there and then.

He bought a guitar the next day.

Then the drummer left.

Undeterred by this minor detail the band worked as a three piece of Stu, Andy, and Clem Pavey on bass to put out "Not In My Name".

And then, Pumpy joined.

A big Day. A punk veteran, having played drums with everyone you've ever met, from the Subs to possibly Elvis himself and Glen Miller, Pumpy brought some solidity, professionalism, and essential Denis the Menance regalia to the outfit. And some proper heavy beats.

And, as the bass positon went vacant (again), he brought in Steve Zuki from Demob to cover the duties and save the day.

Two professional players now in the ranks, the band firmed up, got proper solid and could handle any gigs thrown at them and started turning into a proper outfit.

All good there then.

Except...Steve was schlepping in from bloody Wales twice a month to rehearse, and gigging with Underclass UK as well as Demob, but his professionalism led the rest to forget that they'd only actually borrowed him, so when commitments started taking their toll and Steve had to bow out, the band were at a loss, for they'd now turned into something to reckon with, and didnt want to look back.

But, lo and behold, and mind yerselves, who should come crashing into the rehearsal room, but Charlie himself, threatening to "show all you white boys how to play rock and roll."

Which he did, nailing all the bass lines on the first day, and bringing his own lethal style to the table, instantly becoming an indespensable part of the equation.Top man. Lives for the bass. Result.

Now with eveyone living within the M25, reheasals hotted up and gigs were smashed out and new songs were written with an increasing tightness, professionalism and honed down sound, culminating with the band steaming into the great Pat Collier's Perry Vale Studio in the summer of 2016 to lay down the tracks for the album Rip Your Face Off.

Rip Your Face Off is available from all Digital Distribution outlets and streaming vendors from 5th November 2016.

"(Underclass UK) have a lot to say and a pretty ferocious, uncompromising way of saying it. Far from being an average Oi!/Streetpunk band they are far more sussed and articulate than you’d perhaps imagine from their chosen name." Geb Babey, Louder Than War! 12.3.17 ... more

Bandcamp Daily  your guide to the world of Bandcamp